5 Lies HR Has Discovered On Resumes 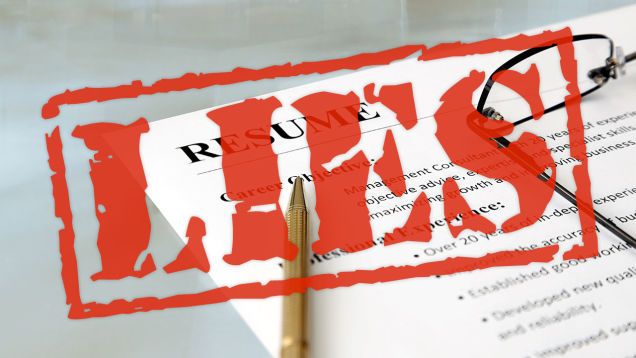 5 Lies HR Has Discovered On Resumes

In the old days before the internet made it possible to immediately fact check absolutely everything, hopeful job seekers often got away with a lot of little white lies and even some big whoppers that they listed on their resumes. Today, the human resources department in companies all across America are catching lies that include fabricated job titles, embellished academic degrees and completely false claims about companies worked for and skills acquired. Those little lies are bad enough to destroy any chance you have of getting the job, but they just can’t compare to some of these huge fabrications that have been discovered on resumes.

This gentleman claimed to have supervised the completion of several area buildings of note, which included a hotel and a factory. When his name failed to turn up on the employment list of the construction companies hired to build these structures, he confessed to having only helped his brother build a dog house for the family pet.

Confident in his decorated uniform, this young man proudly told of his accomplishments as a United States Army General. It was the perfect interview, and everything on the resume was completely true. However, the interviewer was tipped off that something was wrong because the young man hadn’t even reached the age of 30. It turns out that the resume and the uniform belonged to his father of the same name.

3. Babysitter to the Stars

This would-be nanny thought it would be impossible to check on whether or not she was indeed the former live-in nanny for such superstars as Tom Cruise, Shania Twain and Angelina Jolie. She forgot that while the stars themselves may have been unreachable, they all had staff that let the agency know that she had never worked for any of them in any capacity.

It’s not uncommon to find young people these days who are absolute wizards with everything pertaining to computers. One young man delivered a wonderful resume that detailed his superior knowledge of each and every computer program. The problem was that he listed his experience with these programs dating back to 1960 before computers were around and also before he was even born.

This gentleman was simply derailed by having the worst memory in the world. He announced at his interview that he had quit his previous place of employment in an effort to improve himself at a better and more demanding career. His problem was that he was interviewing at the same job that he had just been fired from. The interviewer also discovered that he had submitted two separate applications and resumes with completely different information provided on each.

Stick With the Truth

These five situations are extreme, but you should refrain from adding any padding to your resume. Chances are highly likely that you will be caught in any lie, and that could keep you from getting the job that you may have actually been hired for if you had stuck to the truth.