7 Trends That Will Govern Screening Industry in 2015 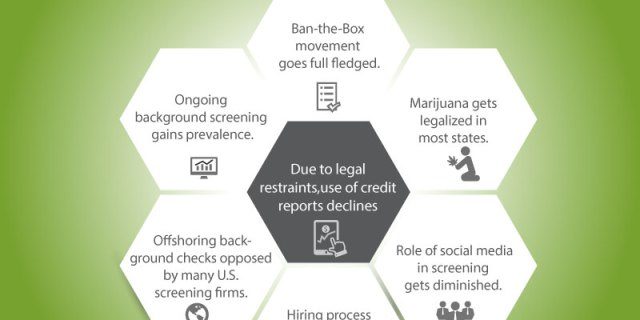 7 Trends That Will Govern Screening Industry in 2015

As we bid adieu to 2014, we are on the verge of witnessing noticeable shift in the way background screening is perceived by employers.  With a strong tailwind from a multitude of factors and convoluting compliance issues there is an increasingly high concern for workplace safety, uprising bad hiring costs – background screening is set for a strong start in 2015. This report covers a host of critical pre-employment screening issues that are expected have a substantial impact on the U.S. employers and job market.  This report gives a heads-up on the emerging do’s and don’ts of running background checks on job applicants.

Screeners as Partners, Not Providers

Both EEOC and FCRA are set to introduce new updates in the rules and regulations governing the preparation, dissemination, and use of criminal record screening reports for employment purposes. With screening laws and regulations becoming more complex and stringent than ever, consistent compliance will pose issues, pushing employers to re-evaluate the method of screening agencies to get their potential candidates screened.  Even in 2014, employers and screening agencies that failed to follow FCRA compliance were slapped with hefty lawsuits.

As a result, in 2015 and beyond, the concern to be legally compliant with the screening laws will precede the actual screening services.  Screening will become an integral and indispensable part of the hiring, making the employers choose their screeners as partners, rather than service providers.