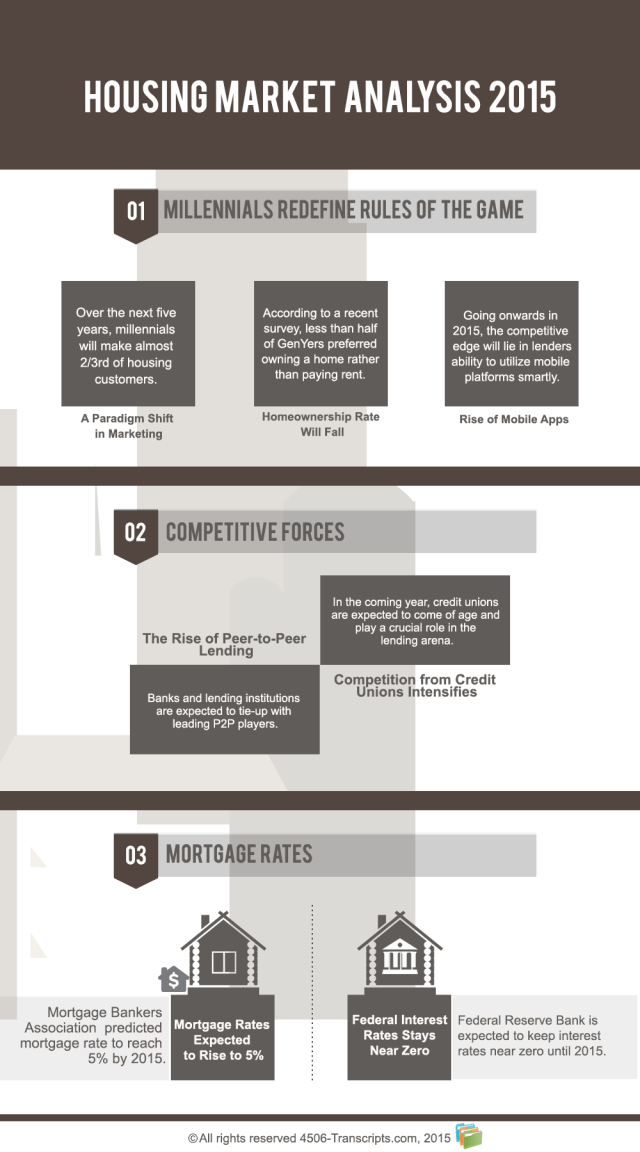 Stepping in the year 2015, we’re on the cusp of witnessing a noticeable shift in the housing market. With a strong tailwind from economic recovery and declining unemployment rates, housing market is heading up for an optimistic start in 2015. Mortgage rates are rising, the availability of homes is improving, alternative sources of credit are emerging, GenYers are delaying their home buying decision – These factors are expected to leave a substantial impact on the housing market and determine whether the economy is going to finally take-off in 2015 or not. Our report rounds up such key trends and changes, citing past figures and future forecasts, giving a heads-up on what are the implications of these uprising trends on the overall economy and the lending business.

1. Millennials redefine rules of the game

(i). A Paradigm Shift in Marketing

A decade ago, GenXers were often heard saying to Millennials, “You need to change. It’s time you grow up!” It’s funny that today it’s not the millennials who need to change, but GenXers. Over the next five years, millennials will make almost 2/3rd of housing customers. This statistical figure has significant implications on how the mortgage lenders market their services to attract and convert this generation. Owing to the marketing noise, millennials have grown sceptical of brands. The constantly connected millennials value peer review/peer advice over intriguing ad lines. It will become pivotal for the lending business to develop a strong presence on social media, leveraging it as a marketing channel to cater to the next generation of homebuyers.

One thing that clearly separates generation Y from X is that they don’t romanticize the idea of owning a home. Being dynamic at their hearts, GenYers aspire to go places and do not plan to settle in one place. Though GenYers aspire to own a home for all of the cliché reasons, it is no longer the American dream. According to a recent survey conducted by The Demand Institute, less than half of GenYers preferred owning a home rather than paying rent. Moreover, the average age of first-time homebuyers is expected to rise in 2015. The rise in the average age of first-time homebuyers coupled with rising property prices and mortgage rates is going to bring down the homeownership rate further. Considering these facts, chances are likely that homeownership rate will fall in the coming year.

With the global consumption of mobile apps growing exponentially, mobile applications will control marketing and servicing strategies in the lending arena. GenYers prefer to make real estate searches online, more often on their mobile devices than desktops. In the year 2015, the competitive edge will rely on how smartly the lender utilizes mobile platforms to interact with the prospective customers.

(i). The Rise of Peer-to-Peer Lending

Peer-to-Peer lending, aka P2P lending owes its origin to the 2008 financial crisis. When the U.S. economy went into a tailspin, the banks lost their credibility and individuals stepped away from the mainstream channels of lending. P2P lending filled the void and has since grown into a billion dollar industry, giving mainstream lending institutions a run for their money. Peer-to-peer lending is a win-win deal for the lender and the borrower. The borrower bypasses the hefty fees, stringent regulations and complex paperwork; the lender earns higher interest rates. It wouldn’t be wrong to say that the rise of P2P lending is set to change the course of the lending industry. The banks and mainstream lending institutions are expected to take a full circle and pave the way for P2P lending with collaborations and tie-ups with the leading P2P players.

Ever since the 2008 financial crisis borrowers have been seeking alternative credit sources. Provincially regulated credit unions proved to be one such viable alternative for the consumers. Being member-owned, non-profit financial cooperatives, credit unions offer the borrowers lower interest rates, flexible lending guidelines, and less stringent norms. Due to this competitive advantage, credit unions are becoming the favourable option to borrowers. For a long time mainstream lending institutions turned a blind eye to the growing popularity of credit unions. In the coming year credit unions are expected to come of age and play a crucial role in the lending arena.

(i). Mortgage Rates Expected to Rise to 5%

If you are waiting to buy or refinance a home in hopes of lower mortgages, better act now! The Federal Reserve is suggesting that rates are not coming down in 2015 or anytime soon. Freddie Mac and Mortgage Bankers Association have independently predicted that a 30-year fixed mortgage rate will increase up to 5% by the end of 2015. Some experts have gone a step further and predicted the rate can go up to as much as 6% by 2015.

Throughout 2014 the Federal Reserve Bank suggested that the interest rates will be kept near zero until 2015. The intent for keeping a check on interest rates is to combat inflation, sustain improvement in the labor market, and ail the overall economy.

What’s the Takeaway for Lenders?